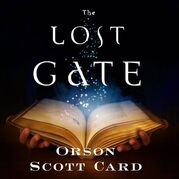 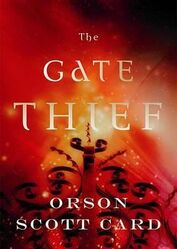 Welcome to the Mither Mages Wiki![]

The Mither Mages Wiki is a devoted wikia project to the Gatefather series, by acclaimed author Orson Scott Card.  The novels, The Lost Gate, The Gate Thief, and Gatefather were published in 2011, 2013, and 2015 respectively. Come and join the thrilling adventure of these Mither Mages as Card shows mythological history--from Loki, to Hermes, Mercury and more--through a lens of explanation the likes of which has never before been so fantastically told in all of fantasy fiction.  Get in on the ground floor and be a founding contributor of this community!

Danny North - Danny North is the main character with the ability to create and manipulate "gates" in space-time to travel from one place to another. He is the most powerful gatemage known. He eventually learns to see people's "inself" of "ka" and can interact with them. His gates also heal a person as they pass though, and when he makes a Great Gate, entwining anywhere from a dozen to a hundred gates to send a person to the world of Westil (or Mitherkame), it increases their magic (or can discover latent magic for drowthers).

Mook - Danny's uncle. Like a father to Danny while he was growing up in the north compound. One of the best clanters of the North Family

Lummy - Mook's wife, like a mother to Danny. Younger sister of Gerd. Has a talent with rabbits

Zog - Uncle of Danny. Wants him dead first for being drekka (with no magical talent, but being born into a magical family), then for being a gatemage.

Gyish - grandfather of Danny. Also wants him dead for the same reasons as Zog, bitter for losing leadership to the current Odin, Alf

Uck - another of Danny's aunts. She helped teach the children.

Tweng - yet another aunt. She also helped out with teaching the children.

Wad (Loki) - born to the North family, he was a very powerful gatemage who closed all of the gates in 632 AD to protect Westil (or Mitherkame) from Set and his minions. Often called the Gate Thief Loki.

Oath/Trick - Son of Wad (Loki) and Bexoi. Murdered by Bexoi in an attempt to kill Wad.

Hermia (Yllka) - Member of the Greek family, daughter of the current Zeus and Hera. Minor Gatemage; likely LockFriend prior to passage through a Great Gate.

Orphans (Those with out a high family)[]

Bexoi - Queen of Iceway, wife of King Prayard. Wants to rule over all of Westil and will do anything for that power.

Prayard - King of Iceway, a powerful Seamage. Not much is mentioned about his ambitions or intentions

Anonoei - mistress of the King. Has two sons, Eluic and Enopp. Imprisoned by the Gate Thief. Loves her children above all else.

Set (Bel) (the devil/dragon) - basically the progenitor of evil. A man-mage who can use his inner self (in egyptian, his ka, or his life force) to take over another person's body or possess it. His followers are called sutahites, who are less powerful, but like him

Pat - drowther (basically meaning regular person not born into any family). Friend of Danny North. Attends Parry McCluer High School in Buena Vista, Virginia. Cured of acne by Danny. Described by Danny as the smartest and most clear-headed and deepest friend of his friends. After passing through a Great Gate discovers latent windmage powers and becomes a windsister, the third level of magic, versus [element] friend, then son/daughter, then sister/brother, then mother/father.

Laurette - drowther as well. Friend of Danny North. Showed Danny around on his first day of school at Parry McCluer High. Described by Danny as having... well just being attractive in the upper body regions.

The above list is in progress. Help us improve and add to it!

Other Books in the Mithermage Universe[]

Community content is available under CC-BY-SA unless otherwise noted.
Advertisement