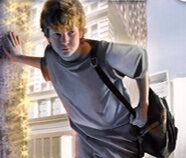 Danny North was the greatest gatefather known to have existed, according to Wad (also called Loki, or the "Gate Thief" as he was often referred to by the mages on Mittlegard).  Danny was the first gatemage to survive while maintaining his gates in his hearthorde in fourteen centuries. Born into the ancient Norse (North) family in Virginia to the most powerful mages in the family, Alf and Gerd (machine-mage and lightmage respectively), Danny grew up under hopeful eyes that watched for signs of a great mage. After years without evidence of magical power, Danny began to be labeled drekka.  After realizing he had been making gates (two dozen, in fact) around the family compound without his own knowledge, he was forced to run from home at age thirteen and try to make his way in the drowther world.  Not long after, Danny would open the first Great Gate between Westil and Mittlegard in fourteen centuries bringing about more than one kind of war to the worlds.

Surviving in the Drowther World[]

Not long after leaving the North Family compound, Danny is forced to shoplift clothes and supplies from a Walmart. He is caught by a guard, but manages to trick his way out of capture. After stealing the clothes, he runs into two Drowthers, Eric and Tony, behind the Walmart who note that Danny is the worst thief they've ever seen. Eric offers for Danny to comes with him to D.C., under the arrangement that Danny helps Eric beg people for money/rides. Danny chooses to hide his magery from Eric.

In D.C., Eric and Danny split up because Danny wants to tour the Smithsonian. He makes his way into the Library of Congress, practicing his gating as he goes. He asks a librarian to help him find books about magically travel. She eventually takes Danny to an old manuscript with writing no one has been able to translate. Danny knows the language and discovers the writing is talking about Loki being attacked by Bel and "Eating the heart of Bel". Danny is forced to temporarily steal the book to finish the reading. Unsure of what this means, Danny memorizes it for later.

Danny uses gates to escape the guards at the Library of Congress, which Eric sees. Eric decides he and Danny should get into theft instead of just begging.

Community content is available under CC-BY-SA unless otherwise noted.
Advertisement